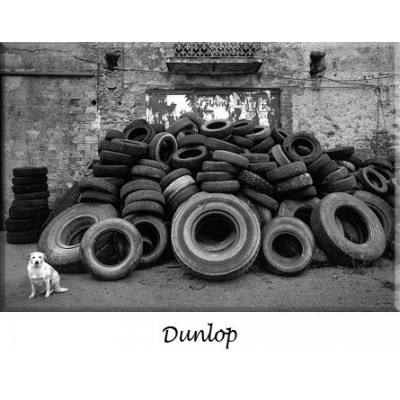 The history of the pneumatic tyre began one day in 1888 when Scotsman John Boyd Dunlop came up with the idea of wrapping a rubber tube inflated with air round the rims of the wheels on his son’s tricycle giving birth to the rubber tyre – an invention created for the purposes of a child’s play that was to revolutionize transport. The Dunlop Pneumatic Tyre Co. Ltd was formed in Dublin (1889), to acquire and commercialise John Boyd Dunlop's patent on pneumatic tyres for bicycles. Commercial production began in late 1890 in Belfast, and quickly expanded. After losing a patent battle to the assignees of an earlier pneumatic tyre patent filed by inventor Robert William Thomson, Dunlop assigned his patent to William Harvey Du Cros in return for 1,500 shares in the resultant company. In the end Charles Boyd D. did not make any great fortune on his invention. During the twenties Dunlop diversified it’s activities by buying the Mackintosh group (foorwear and clothing), formed an aircraft division to cater for this growing industry by providing it with rubber and tyres, and by 1930 started selling the well known Dunlopillo matresses after the discovery and development of latex foam. While the first application of disk brakes on a automobile go back to the early attempts of fitting a primitive design of disc and caliper on a Lanchester as early as 1905, it took quite some time before this technology was to be applied to passenger cars. As usual WW2 inspired many inventions, and Lockheed and Girling developed systems that both used solid discs and complex multiple-piston calipers. The Dunlop Rubber Co. created his own aircraft brake designs, which in turn produced quite a number of patents. The central feature of the Dunlop disc brake was that both rotor and caliper were fixed in the axial plane. After the war Girling bought a license to produce passenger-car disc brakes under Dunlop patents, and the prototype unit was exhibited at the London Motor Show in Earl's Court in 1951. Among the first to begin testing the Dunlop/Girling disc was Jaguar. The following year, Jaguar installed disc brakes on the Le Mans team of C-type roadsters. This turned out to be the right decision. Jaguar's victory with disc brakes is now legendary. Disc brakes won Le Mans for Jaguar because while the Ferrari V-12 coupes had a higher top speed. Jaguars could maintain speed long after the Ferrari brake lights came on. They outbraked the Italian cars before every turn. It was a significant victory for disc brakes, and the racing world took immediate notice. Dunlop Rim & Wheel Co. began to make brakes for race car constructors. By 1955 all British racing cars were equipped with disc brakes, and by 1958, even conservative Enzo Ferrari made the switch to disc brakes on its Grand Prix cars. But the real breakthrough in postwar production cars was made not in England but in France. There Citroen was preparing a new model to succeed the Traction Avant unchanged since 1934. The specifications included inboard disc brakes for the front wheels. An in house Citroen design, with a fixed rotor and sliding caliper. It became standard on the DS-19 and ID-19 models of which 1.300.000 cars were produced between ‘55 and ‘75. Adopted the same year on the TR3, disk brakes are now present on 99,5% of all cars produced. -

Price €225.00
Dunlop replacement calipers. With the expert help of a specialist, Classic Parechocs offers an hard anodized alloy replacement for the original...
