About Stainless Steel and our production methods.

English metallurgist Harry Brearly, working on a project to improve rifle barrels around 1930, accidentally discovered that adding chromium to low carbon steel gives it stain resistance. In addition to iron, carbon, and chromium, modern stainless steel may also contain other elements, such as nickel, niobium, molybdenum and titanium enhancing the corrosion resistance of stainless steel.

It is the addition of 19/20 % chromium to the steel used for our bumpers that makes it resist rust, or "stain less" than other types of steel. The chromium in the steel combines with oxygen in the atmosphere to form a thin, invisible layer of chrome-containing oxide, called the passive film. The sizes of chromium atoms and their oxides are similar, so they pack neatly together on the surface of the metal, forming a stable layer only a few atoms thick.

If the metal is cut or scratched and the passive film is disrupted, more oxide will quickly form and recover the exposed surface, protecting it from oxidative corrosion. Some kind of self-healing that can be repeated infinitely.

Iron, on the other hand, rusts quickly because atomic iron is much smaller than its oxide, so the oxide forms a loose rather than tightly-packed layer and flakes away. Everyone indulged with classic cars knows how seriously rust can destroy bodywork.

While manufacturing our  products all our overriders are test fitted to the bumper they will be mounted on before polishing. They are then adjusted to fit perfectly on the bumper so no little gaps between bumper and overrider exist. Next all bumpers and overriders receive unique numbers so no item can be displaced.

Only then the bumpers and overriders are polished to obtain the everlasting unique shine equivalent to chromed mild steel.

This search for quality is also the reason why we sell only complete sets. 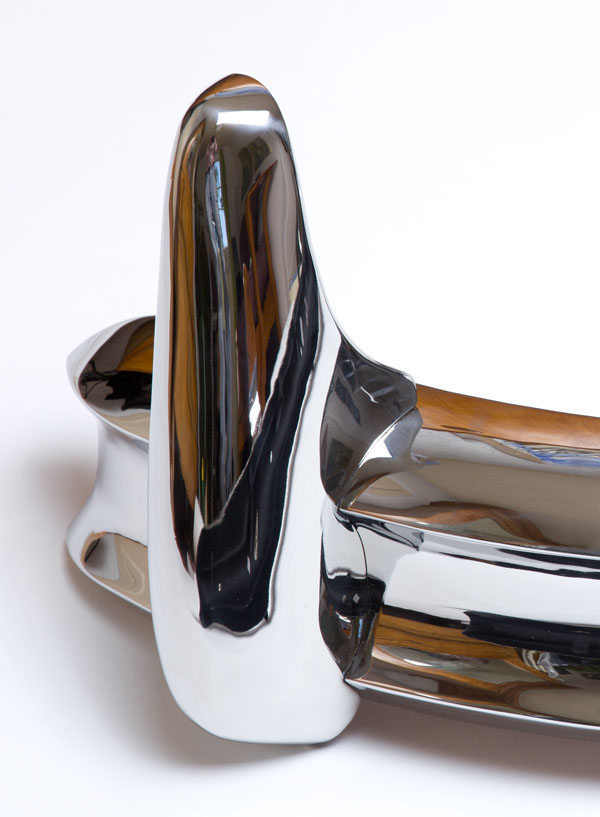